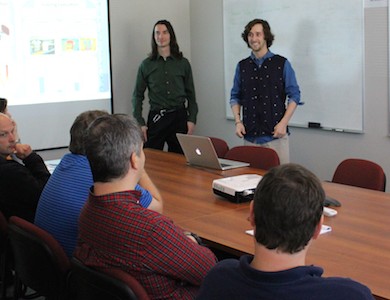 The students focused on how the vest might be used by firefighters, one of the many applications of the CO2-powered cooling vest. They had to evaluate important factors related to firefighter equipment, harsh environments, and user needs to develop possible design changes.

David and PJ were at Porticos in April to review their project goals, design challenges, and recommendations with the Porticos engineers and local community members. They demonstrated the new features of their vest design, discussed possible areas of future research, and took questions and suggestions from the audience.

Check out clips from the students’ presentation:

The students’ main findings were that small amounts of energy could be captured and saved using thermoelectric generators, thanks to temperature differences in the vest. The students suggested that this energy could be used for a lower-power signaling technology, applicable to the needs of firefighters and possibly other industries, such as medical or military.

“Porticool is an exciting early technology application for the thermoelectrics being developed in ASSIST, and we are grateful to Porticos for providing such a fantastic educational opportunity for our students” said Tom Snyder, Instrusty Liaison with the NSF-funded ASSIST center at NC State.

The students’ revised design used two CO2 tanks, rather than a single large tank, for a more balanced fit for the user. The students were able to design the vest so that the main connectors were inside the vest, which results in less of the cold being lost to the environment during transfer. Additionally, their vest fabric used a lighter weight, melt-resistant antimicrobial fabric.

Porticos designers will be able to explore more of the students’ design, and their test results, now that the project has concluded.

“I was very pleased with the level of creativity David, Brian and PJ brought to the project and the subsequent results they were able to achieve.  I anticipate that we will integrate some of the concepts that they developed in future upgrades to the production design,” said Porticos President Greg Patterson.

After presenting the project to Porticos, David, Brian and PJ took the project to  the Textile Engineering & Textile Technology Senior Design Poster competition, which was held in conjunction with Electrical and Computer Engineering (ECE), Industrial and Systems Engineering (ISE), and the Engineering Entreprenuer’s Program (EEP). 84 projects were presented, and the team won 3rd place in technical design category.

The senior design course provides TECS students a chance to design, create, and test complex engineering systems before they graduate. By sponsoring this project, Porticos supported a real-world, goal-based project for these three students, challenging them with the kinds of technical problems, commercialization processes, and product design challenges that the Porticos engineers engage with every day.

Porticos would also like to thank Dr. Jur and Dr. Gorga for the opportunity to sponsor this senior design project and looks forward to sponsoring more projects in the future.